More Opioids Scheduled in the USA...


Also published was a Final Order to control the opioid research chemical MT-45. It seems that the government skipped filing a Notice of Intent and went directly to Final Order on this one. 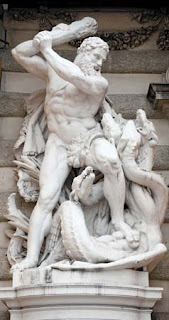 Heracles vs. the Hydra. Southern entrance to the Hofburg,Vienna, Austria.
Image from: https://www.britannica.com/topic/Hydra-Greek-mythology


This brings the list up to 20 total fentanyl analogs and designer opioids scheduled by the Federal government since 2015.


It is quite alarming to see that the number of compounds scheduled has rapidly increased each year since the initial scheduling of Acetylfentanyl in 2015. Also, don’t forget that the other major fentanyl derivative that has caused many intoxications and deaths in the USA, Carfentanil, is already Schedule II.


Novel psychoactive substances (NPS) are like the mythological Hydra. Sever one head, and two more sprout from the wound.