Officials in New York are issuing a warning with regards to a small outbreak of synthetic cannabinoid illnesses which have sent at least 15 people to the emergency room in East and Central Harlem and Chelsea over the last few days.

The report also stated that in New York synthetic cannabinoid associated visits to the emergency department have increased by 220% (assuming this is in comparison to 2013).

This report seems on the small side especially when compared to recent reports in Colorado, Louisiana, Texas, and Florida, but these things always start small and increase rapidly. I'll update if I see any more information.

Here is the actual NY Department of Health and Mental Hygiene press release.

Also, here is a link from a story over at the Village Voice Blogs. I simply love the title (minus the "fake weed" terminology).

I still don't see any reports on what specific adverse effects have been encountered. Or of course no mention of analytical confirmation at this point.

FTG
Posted by ForensicToxGuy at 5:26 PM No comments:

Thought for the Weekend

While writing up case reports regarding synthetic cannabinoid-associated deaths and reading other reports, this thought occurred...

Fun is defined here as adverse effects including tachycardia, seizure, nephrotoxicity, and death.

If you choose to partake in the substances, then keep that in mind. And no, I do not recommend or condone using synthetic cannabinoid containing products, so don't ask me what substances I would recommend using (seriously I get those kinds of questions).

FTG
Posted by ForensicToxGuy at 11:20 AM No comments:


Due to some recent illnesses and detections in herbal incense products (named Train Wreck 2 and Kali Berry 2), two newer generation synthetic cannabinoids have been added to the controlled substances list by the state of Louisiana. These are 5F-AMB and FUB-AMB.

The AMB series of compounds can be considered derivatives of the earlier AB-INACA series of synthetic cannabinoids. AMB compounds differ from the AB-INACA substances by a replacement of a primary amine with methoxy group. This change leads to a moiety structurally based off the amino acid, valine, also known as 2-amino-3-methylbutanoic acid. Valine is not produced by the human body and must be ingested via the diet. 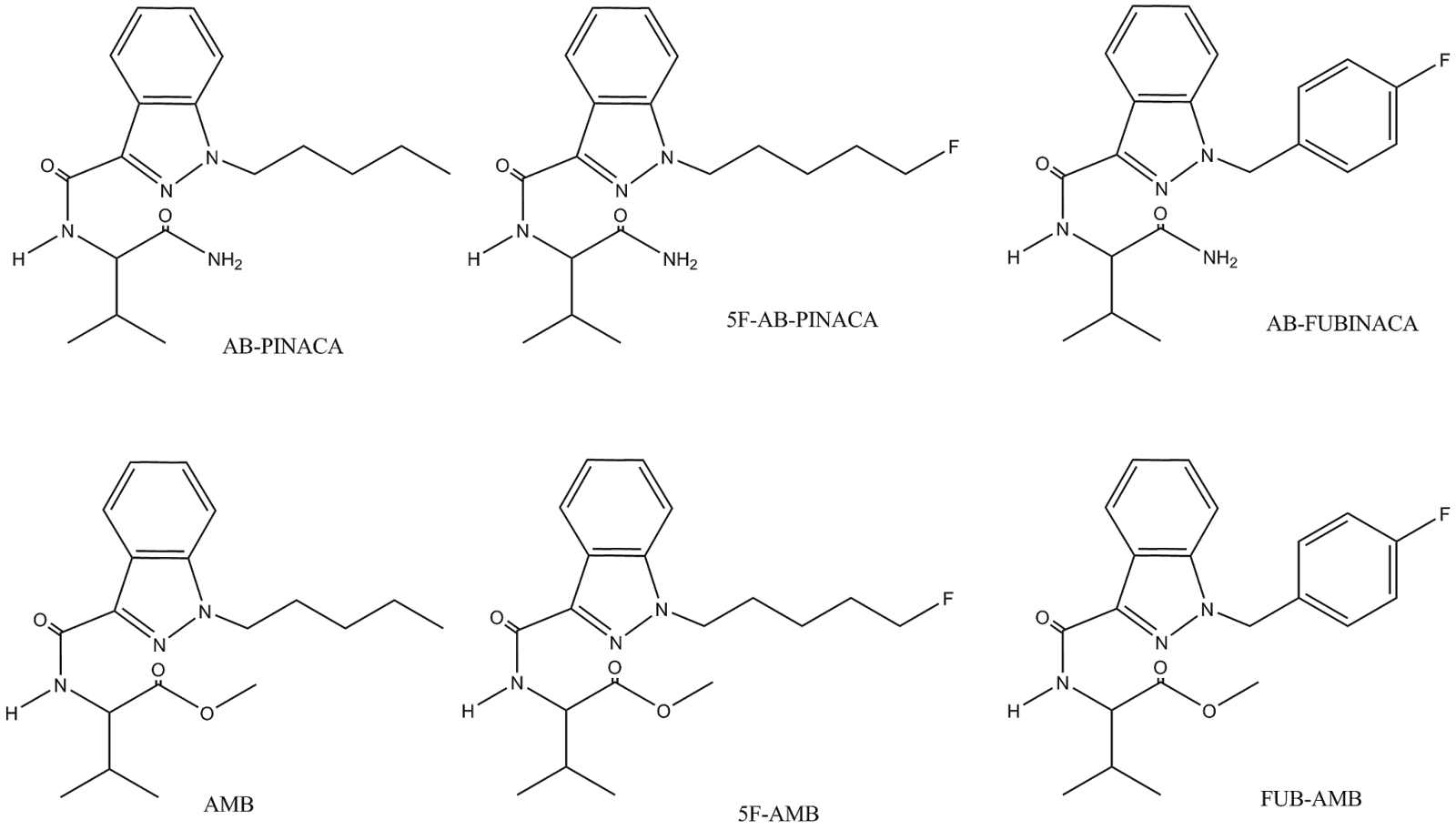 Indole based derivatives also exist. Two of these are named MMB018 and MMB2201.

So, what's all of this mean? I don't know. And I doubt any other toxicologist or chemist knows either. Again, as with all new emerging substances, this new series has an unknown pharmacological and toxicological profile. Simply, it is just more unknown entities to add to the rapidly growing heap of unknowns.


I'll end with a question and I welcome your responses...would we be in this cat and mouse game between manufacturers and legislators if we had approached the first wave of JWH compounds (JWH-018, JWH-073, JWH-200) somewhat differently back in 2010-2011?
Posted by ForensicToxGuy at 10:00 AM 5 comments:

Similar to how the 2012 incident in Miami that became associated with "bath salts" resulted in a wildfire-type spread of media hysteria, a plethora of Internet articles centered on MDPV (methylenedioxypyrovalerone) started appearing on June 30th and multiplied rapidly over the course of a day or so. At this time, I quickly count approximately 20 or so articles using the word "cannibal" in the title.

Here are just a few:
Powerful 'Cannibal' Drug Being Peddled to British Clubbers in Ibiza
Cannibal drug in use in Spain
Cannibal drug hits the Ibiza party scene
Brits warned of mystery 'Cannibal' drug in Ibiza which has been blamed for biting attacks

Let me state this here on this blog:

MDPV, other substituted cathinones, or any other "bath salt" drug were not involved in the incident the media termed as "the Miami Causeway Cannibal". Rudy Eugene's attack on Ronald Poppo in Miami, Florida in 2012 was not MDPV or "bath salt"-related. Period. Other than tetrahydrocannabinol (THC), NO substances were detected in Mr. Eugene's blood specimen taken by authorities. I'm sure the laboratories doing the analysis were of the highest forensic toxicology accreditation/certification and utilized the most up-to-date analytical technologies.


The lesson here is that media loves to take a story and run - whether there is evidence of truth or not.