Kratom into Schedule I

I’m sure you’ve heard by now that the DEA has filed a notice of intent to temporarily place kratom (active substances, mitragynine and 7-hydroxymitragynine) into Schedule I of the Controlled Substances Act.

What is kratom and why does the DEA think it needs to be banned?


Mitragyna speciosa is an tree that grows in Southeast Asia (primarily Thailand and Malaysia) and is known as kratom and biak-biak. The plant is in the Rubiaceae family, which famously includes the genera Coffea (caffeine). The leaves of the kratom tree contain many alkaloids, but the two primary ones are mitragynine (66% of total content) and 7-hydroxymitragynine (2% of total content). These two alkaloids are mu (μ) opioid receptor agonists similar to morphine and therefore, would exhibit similar pharmacological effects such as analgesia, sedation, central nervous system depression, and respiratory depression) From a potency aspect, mitragynine is considered to be 4 times less potent than morphine, while 7-hydroxymitragynine is said to be 10-20 times more potent. In lower dosages, kratom is said to have a cocaine-like (stimulant) effects. 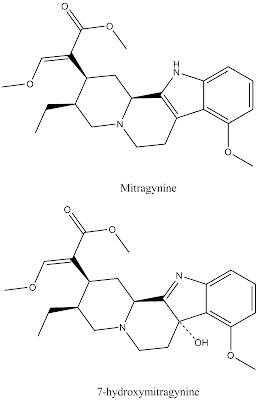 Because of the opioid pharmacological activity, the kratom plant has been used for its medicinal properties (without the supervision of a physician or medical professional) in the management of chronic pain and treatment for opioid dependence/withdrawal. It has also been used as a recreational substance of abuse.  The raw leaf of the plant can be chewed or boiled into a tea. Kratom has been used for decades in Thai cultural traditions in this form. More recently it has been found in the form of capsules/pills, powders, and concentrated extracts.


Up until this notice of intent, the plant was considered a “drug and chemical of concern”, which is another name for the DEA’s watchlist of emerging substances. On February 28, 2014 and June 15, 2014 the US Food and Drug Administration (FDA) announced an import alert for kratom and issued multiple guidances that detailing that any shipments containing Mitragyna speciosa were to be seized without physical examination, especially those deemed dietary supplements and bulk dietary ingredients.


Data from the National Forensic Laboratory Information System (NFLIS) over 2012-2015 shows that mitragynine seizures in solid dose evidence has been relatively low. There were no reports of mitragynine in 2012. In 2013-2014, there were 181 and 137 detections of mitragynine respectively. The only data for 2015 available is through the midyear report and it listed 93 detections of mitragynine. To put this in perspective, propoxyphene (Darvon, Darvocet), a drug that was removed from the US market in 2010-2011, had 208 (2013), 143, (2014), and 53 (2015-midyear) detections reported in NFLIS.


Data from the CDC and National Poison Data System shows that from January 2010-December 2015 total 660 phone calls related to kratom exposure – 73.8% of calls reported intentional exposure to kratom and 90.2% reported ingestion of the substance.


Data from toxicology laboratories and coroner/medicalexaminer offices report a growing number of positive detections of mitragynine and/or 7-hydroxymitragynine.  There were 31 positive results reported from August 2012-July 2013; 274 positive results from July 2013-May 2014; 555 positive results from December 2014-March 2016. It is important to point out that without further case context, we cannot state much more about the toxicology results or detections of mitragynine other than they were simply detected in a biological fluid - the detections could have been associated with cause of death or they could have merely been incidental findings in postmortem toxicology; they could also be simple detection in probationary urine drug testing or even findings in urine drug testing for physicians prescribing medications and testing their patient's urine. for prescribed drug/illicit substance use. The Federal Register Notice of Intent states that 15 deaths have been associated with kratom from 2014-2016 – many of which have included the use of other central nervous system depressants or other drugs. Most notably, there were a cluster of nine deaths in Sweden associated with kratom use (Krypton brand) that was contaminated with the potent O-desmethyltramadol (active metabolite of the drug tramadol).


Because of these reasons, the DEA feels that scheduling kratom is necessary to avoid an imminent hazard to public safety. I look forward to observing the outcome of this action. I’m not so sure that the DEA has thought this one through completely. There has already been a petition created via the WhiteHouse.gov website - at the time of typing this sentence, there have been 49,965 signatures (100,000 signatures are needed) acquired in about 4 days. The American Kratom Association has also banded together for a Kratom March on Washington DC on September 13, 2016.


Some References of Interest


1.      Federal Register. Schedules of Controlled Substances: Temporary Placement of Mitragynine and 7-hydroxymitragynine Into Schedule I. Notice of Intent. August 31, 2016.
https://www.federalregister.gov/articles/2016/08/31/2016-20803/schedules-of-controlled-substances-temporary-placement-of-mitragynine-and-7-hydroxymitragynine-into