"Fair is foul, and foul is fair: Hover through the fog and filthy air."

The CDC has released more information about the Colorado illnesses (221 suspected cases in approximately 1 month) that are linked to synthetic cannabinoids. The full text of the release in MMWR can be found here. Two substances that have been identified in products associated with these cases are ADBICA and ADB-PINACA. They both share a very similar chemical structure with the only difference being that ADBICA contains an indole moiety and ADB-PINACA contains an indazole moiety.  Another note on the newer synthetic cannabinoid terminology that may be helpful for the reader – the 1-amino-3,3-dimethyl-1-oxobutan-2-yl group has become known as ADB and the 1-pentyl-1H-indazole-3-carboxamide group has become known as PINACA. 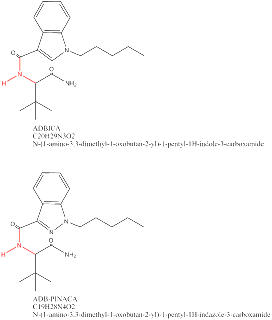 An interesting feature of these newer synthetic cannabinoids is the ester or amide linkages. These linkages were not included in the earlier waves of cannabinoid compounds (i.e. JWH-018 → AM-2201 → UR-144...) as they contained the simple ketone linkage. The ester linkage is seen in the quinolinyl carboxylate derivative compounds such as PB-22, 5F-PB-22 and BB-22, while the amide linkage is seen the many of these newer substances such as the various ADBs, PINACAs, and FUBINACAs. Regarding these amide-containing cannabinoids (structures referenced in the figure above in red-color and in a previous blog post here), the amide linkage can be very susceptible to hydrolysis reactions. In the case of the two compounds related to the Colorado cases, possible in vivo amide hydrolysis would lead to formation of a carboxylic acid and an amine. Could this amine be active in the body? Possibly.

As a relevant sidenote, the synthetic cannabinoid, NNE1, otherwise known as MN-24, contains the same type of amide linkage but with a naphthoyl moiety. This compound was pre-emptively banned by the New Zealand government in November 2012 due to hypothesized formation of a carcinogenic metabolite - 1-aminonaphthalene. 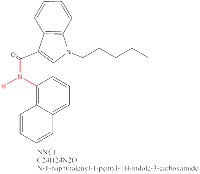 I'll expound on this at a later date, but I believe we are seeing the signs of the legislation overkill that has been employed by the Federal and various State governments over the past few years. If compounds continue to be controlled in the same manner, then compounds with ever-increasing complexity of chemical structures will continue to emerge. Bleak, yet rooted in reality - I have no doubts that there will be more of these outbreaks.