Counterfeit Oxycodone Tablets in Indiana: Fentanyl and Carfentanil (May 2017)

In May 2017, the Indianapolis Metro Police Department (IMPD) seized 970 "oxycodone" tablets that were colored light and dark blue. The laboratory analyzed the "oxycodone" tablets and identified them as counterfeit / illicitly manufactured. The lighter blue tablets were presumptively positive for fentanyl and the darker blue tablets were presumptively positive for carfentanil. Confirmatory analyses were not completed. 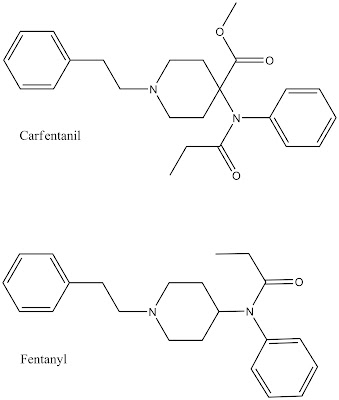 
The detailed account of the seizure as well as pictures of the tablets can be found in the following web link to the DEA's website.